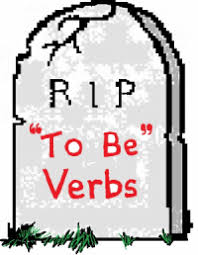 When you’re writing a novel, you want to use concrete, everyday verbs. Examples of these are jump, smile, run, look, show, and eat. You can picture the actions in your head and there is no ambiguity.

He ran down the street and jumped over the fence.

Weak verbs usually end in ‘ate’ or ‘ize’. You know the ones. Some examples are finalize, incorporate, anticipate, categorize. They leave a vague sense of action without spelling it out. As a reader you have to reach for it, and these verbs can really way down your sentence.

The bookkeeper utilized her expertise to manipulate the numbers.

Dead verbs don’t evoke movement or images. They stop the action. They allow us to generalize instead of provide the details necessary to picture what is going on. They tell us what’s happening when we want to see. Examples of dead verbs are was, is, were, are, could, had.

Cassandra picked up the flower vase and threw it into the wall. She stomped across the room, slamming the door as she left.

I think you get the picture. Something to think about. I hope this helped.