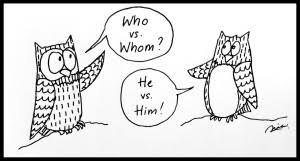 Am I the only person who has a problem with who versus whom? Fortunately, I don’t use sentences requiring these words that often, but when I do, I become paralyzed. I’m not sure. I usually read through the sentence a few times using both words and pick the one that sounds better to me. There is nothing scientific about that. It simply boils down to preference.

This week I ran into a method to determine which word is correct, who or whom, and thought I would share my findings on this blog.

***Look at the last letter of he and him to determine if you are using who or whom.

Still a little complicated, but hope this helps 🙂