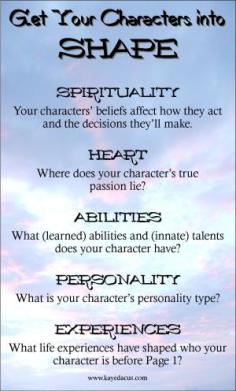 Make sure your characters behave the way they are supposed to, and don’t force them to do something that doesn’t fit with the persona you built.

You know what I’m talking about. Think about the people closest to you. You know them well, and you also know there are certain things they just wouldn’t do. Your characters should be the same. You introduced them one way-don’t send them in the opposite direction, unless you built a bridge explaining their actions or hinted that they aren’t who they pretend to be. Make sure they behave the way they are expected. That doesn’t mean they can’t surprise you occasionally, but remember they should always do what’s true to themselves.

Your character should also grow and change as they mature and face different circumstances in their lives. Felicity may start out being selfish and spoiled, but when she is forced to work at a homeless shelter, her perspective changes. She changes. She learns to empathize and relate.

Your character must act and not merely be acted upon. Nobody wants to read a book from front to back about a victim. The character may start out in peril and face numerous conflicts for which they have no control, but at some point, they had better step up and take control. Even the most passive protagonist must in the end choose to do something.

Are Your Characters Behaving?

2 thoughts on “Are Your Characters Behaving?”